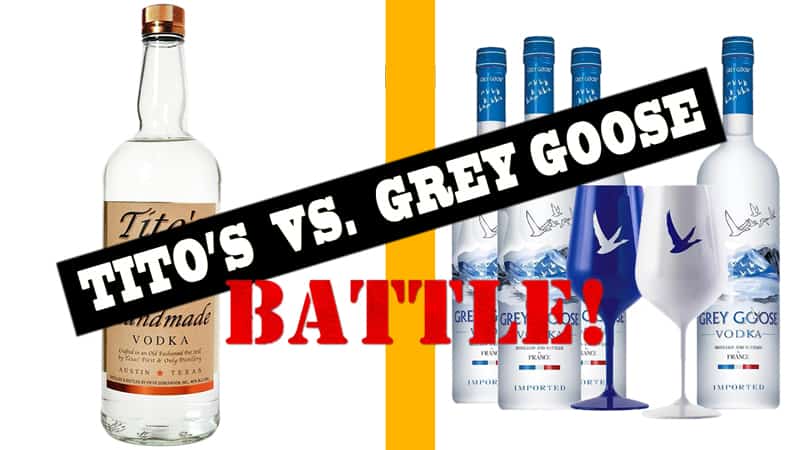 Vodka, one of the most versatile and varied drinks in the world. The sheer number of brands, flavors, and prices can be quite intimidating to a newcomer. Its sheer popularity is due to the fact that you can make vodka taste whatever you want it to.

In this article, we will look at some of the differences between two very popular vodka brands; Tito’s Vodka and Grey Goose. Aside from the obvious price differences, we will dive deep into the characteristics of each vodka and how they differ from each other.

First up is a crowd favorite, produced in Austin, Texas is Tito’s Handmade Vodka. The “handmade” tagline is not only for show, the founder (Bert “Tito” Beveridge) started the company as a one-man operation, making his vodka using self-built pot stills in 1997. Now, Tito’s Vodka is manufactured by Fifth Generation. The vodka’s popularity soared high during the 2000s, catching up to industry giants such as Grey Goose. In only 4 years, the vodka brand was no longer considered a micro-distillery for having surpassed the industry standard of 40,000 cases.

Today, Tito’s Vodka is made using ten modern stills and modern equipment that can produce 500 cases per hour. However, don’t fret, the flavor and texture still stay the same as it was when the brand started. Tito’s Vodka is made from yellow corn which is then distilled 6 times. There is no aging process. The vodka is very clean, pure, gluten-free, and goes down quite smoothly.

You can pretty much drink it straight up or mix it in your favorite cocktail recipes. It has a noticeable sweet flavor to it, not too much though, just enough. Also, the alcohol burn isn’t as intense, compared to other vodka brands. To top all this off, it comes at an affordable price.

On the other hand, there is Grey Goose Vodka. This vodka brand is one of the most go-to vodkas for a lot of drinkers out there. It is pretty much available everywhere you go. Today, Grey Goose vodka is produced in France. However, the brand does not actually have a French origin. Sidney Frank, an American businessman and founder of Grey Goose, developed the idea for the brand in 1997. He partnered with Francois Thibault, a cognac producer in France. Together, they decided to pick France to set their home base to differentiate themselves from other vodka brands.

Grey Goose is one of the most mixable vodkas you can find in the market today.  It is made from wheat locally produced in France which is distilled five times. There is a subtle sweetness to the flavor of Grey Goose, but the alcohol burn is stronger than Tito’s Vodka.

Grey Goose’s flavor lineup is quite simple yet still diverse. These are L’Orange, La Vanille, Le Citron, La Poire, Le Melon, and Cherry Noir. Grey Goose surely provides a flavor that will suit your tastes. The price tag on Grey Goose vodkas can be pricey, compared to other vodka brands.

The Main Difference Between The Two

In conclusion, there are some very real differences between the two vodka brands. However, which one you should get for the next get together is up to preferences. If you prefer a sweeter flavor and less alcohol burn, you may want to go for Tito’s Vodka. If you like a little punch and some variety, Grey Goose may be the way to go. Whatever you choose, have fun and drink responsibly!