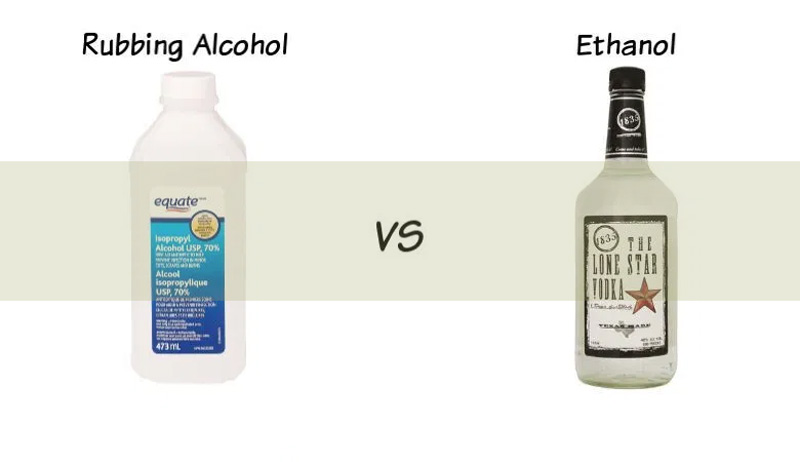 The majority of people around the globe use rubbing alcohol as primary disinfectant. However, has it ever crossed your mind to use vodka instead? Before we dig deeper on that question, let’s answer: What is the main difference between rubbing alcohol and vodka?

Generally, rubbing alcohol is made up of 70% isopropanol in water, while vodka is composed of 40% ethanol in water. Isopropanol and ethanol are two different types of alcohol that have similarities in structure. However, the chemical difference between the two is enough to make the former harmful to ingest and the latter drinkable.

Nevertheless, when it comes to killing germs, both can be effective. According to the Centers for Disease Control and Prevention, 65% to 95% of alcohol, whether it be isopropanol or ethanol, can work as a disinfectant.

Vodka contains ethanol while some rubbing alcohol may either contain isopropanol or ethanol. However, take note that isopropanol is an effective disinfectant at 40% to 60% concentration, ethanol works best at 70% to 90%.

Experiments have proven that anaerobes (bacteria that can live without oxygen) can survive up to 10 months in 10% ethanol concentrations, but with increased concentrations (40% and above), they can only live up to four weeks.

Note that time of contact indicates how effective alcohol is in battling against microbes for a certain amount of time. In other words, lesser contact time means that bacteria or viruses can die quickly, typically less than a minute.

Vodka vs. Rubbing Alcohol For Cleaning

When you see ethanol as a substance found in hand sanitizers or rubbing alcohol, you may think that grain alcohol is a germicide as well, since it contains ethyl alcohol. Well, you are technically correct, because 70% of ethanol can suffice as a cleansing agent.

Nonetheless, when you search for information from the World Health Organization, you will not find vodka as a recommended disinfectant. The recommended guide of WHO does not specifically mention vodka, but uses the terms isopropyl alcohol and ethanol.

Unlike other kinds of liquor, vodka can smell like rubbing alcohol. When you sniff it, you can detect the smell of alcohol rather than the aroma of the oak barrel it got fermented in. Nevertheless, the strength of its smell depends on the percent of ethanol it contains.

Can I Use Vodka Instead of Rubbing Alcohol?

In conclusion, you can use vodka for disinfecting, but it is not practical when you think of your resources. Rubbing alcohol doesn’t cost much and is easy to find, unlike vodka. Despite it all, bear in mind that soap will always be no. 1 and isopropyl or ethanol-based alcohols only come second.