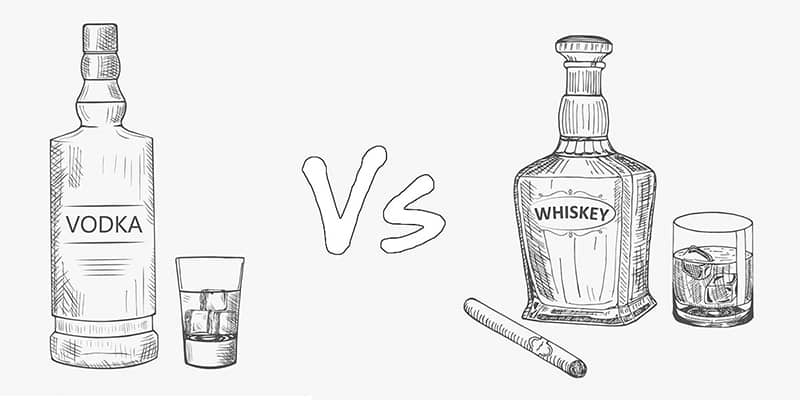 Have you ever stood before a liquor stand, a bartender, or a friend – debating with yourself, what to drink – vodka or whiskey?

Although belonging to the same family of alcoholic beverages, vodka and whiskey are oftentimes pitted against each other, tagged as opposites, and labeled long-time arch-enemies.

In this article, with some facts and information, you might just figure out what is best suited for you, your friends, or just for your Friday night.

Here are some interesting facts on vodka and whiskey:

Vodka is a clear, odorless, and often flavorless alcoholic beverage, which originated from Russia and Poland. It is composed mainly of water and ethanol, infused with some flavorings, depending on the brand.

The popular spirit is made from continuous processes of fermentation, distillation, and filtration. During fermentation, the sugars stored in starch-rich food like potatoes, corn, wheat, rye, and barley are converted by yeasts into alcohol and carbon dioxide (by-product).

Afterward, the food mash undergoes simultaneous heating and cooling, called distillation, to separate the alcohol content.  The remaining impurities in vodka are filtered out as the liquid passes through vegetable charcoal. According to liquor experts, this is what sets vodka apart from other distilled spirits.  Distilling and filtrating vodka for three or more times give its neat and thin texture in your mouth.  Leading vodka brands even use this as their major selling point, putting “Distilled five times” or “Filtered three times” on their labels.

The vodka industry has grown steadily through the years as interest in cocktail culture, craft spirits, and feminine drinks surged. Forbes reported that in the United States alone, 2019 total revenues rose by 2.9% amounting to $6.6 billion.

Often a symbol of strength and manliness, whiskey is an aromatic and strong-flavored spirit from Scotland.

Tracing its historical roots, the term “whisky” originated from the word “usquebaugh” which means “water of life”. “The drink eventually reached American and Asian soil, where its name evolved to “whiskey”.

Whiskey is made from fermented grain mash. Most distilleries use barley, rye, corn, and wheat as base ingredients while some make use of non-traditional grains like millet, oats, and rice, making the taste more complex and fascinating.

The continuous experimentation and creativity of whiskey distilleries all around the world diversified whiskey into several types namely:

The basic processes of whiskey production include mashing fermentation, distillation, and aging.

Mashing is the first step in production where hot water is added to a huge tank of dried grains and cereals. This process induces the breakdown of starch stored in the ingredients into fermentable sugars.  Afterward, the cereal mash will be forwarded to fermentation tanks where subsequent steps – fermentation and distillation occur.

Unlike vodka, whiskey needs to be stored in wooden barrels made from white oaks for three or more years. This is called aging; Whiskey interacts with the wooden barrel over time, creating a complex and distinct combination of flavors. Whiskey also develops its characteristic golden-brown color during aging. Did you know that experts can estimate the age of the whiskey just by looking at its color?

Whiskeys remain as top tier in the U.S. market in terms of revenue. In fact, according to Forbes in 2019, the whiskey industry made $10.3 billion in revenue by selling 69.3 million 9-liter cases of spirits.

To help you further in making the “right” choice, let us compare the two using these categories:

The Difference in Taste

When it comes to taste, vodka and whiskey are completely different. 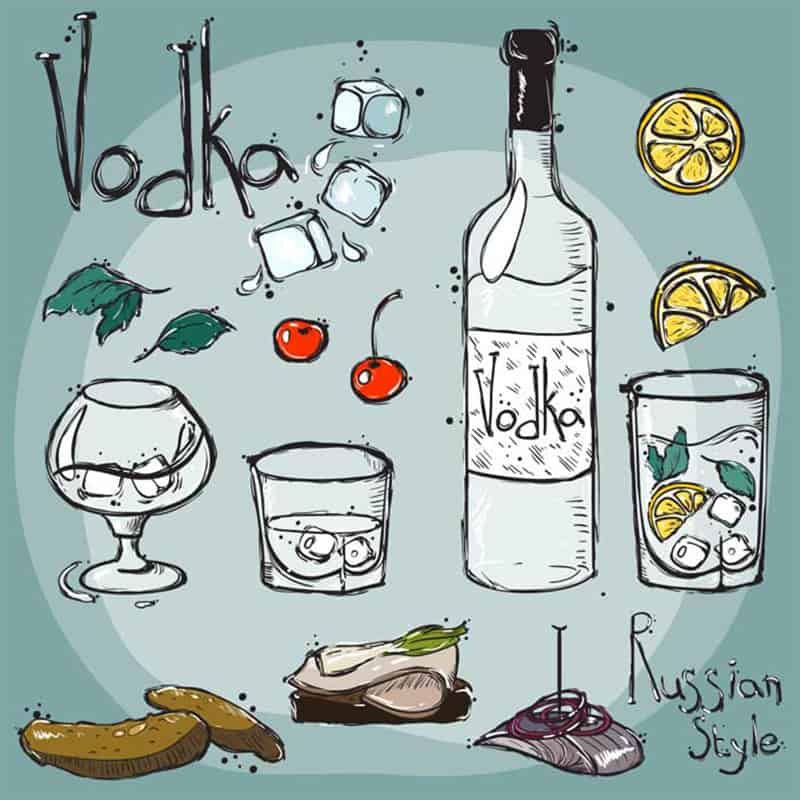 Among all the distilled spirits, vodka maybe has the most subtle taste. If you would ask some friends, they may outright tell you, “Vodka tastes like water.” They might be right. The U.S. law even dictates that vodka should be colorless, odorless, and flavorless. However, fans, enthusiasts, and experts tell us otherwise; Vodka indeed has flavor.

Vodka can taste like a lot of things. It can taste sweet, creamy, spicy, and citrusy. It may also give you flavors of bread, grain, or spices, and that is completely normal. The base ingredients used in making the vodka leaves a distinct and lingering taste that is for you to experience.

You can drink vodka direct from the bottle, but you may also want to try mixing it up with fruit juices, other alcoholic drinks, and spices, serving yourself a cocktail. You can literally mix vodka with anything you can find in your refrigerator or liquor stand. Its versatility that lies within its subtle flavor blends neatly with everything – neither too overpowering nor too strong. 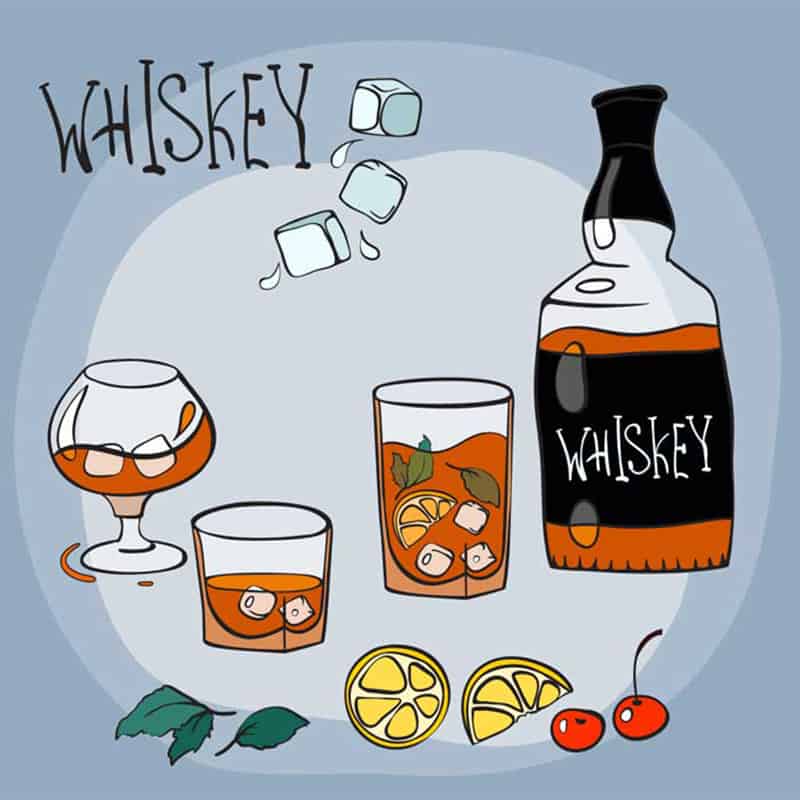 In contrast to the simplicity of vodka, whiskey surprises you with its bold and strong flavor. The richness and diversity of whiskey culture gave birth to many fascinating and striking flavors found in different parts of the world.

First things first. One thing about drinking whiskey is deciding whether you want to it neat, with water, on the rocks, or mixed in cocktails.

Whiskey neat (just whiskey) can be challenging for beginners and may come as a shock, especially for the taste buds. This is perfect for people who enjoy the strong kick of alcohol taste. On the other hand, some people prefer their whiskey with a few drops of water.

Diluting your whiskey with water can lower the alcohol content, allowing your taste buds to sense more flavors. Ice cubes can also be added to whiskey. This is preferred by some because, as they say, it makes the drink painless to drink. However, experts suggest that ice numbs your taste buds, hence preventing you from “feeling” the real flavors. But if you want to drink cold whiskey on the rocks, who are they to tell you otherwise?

Finally, you may want to try whiskey cocktails like Whiskey Sour, and Manhattan. These are top choices among people who dislike the plain taste of whiskey.

Whiskey culture has seemingly penetrated the millennial market since 2018. The Distilled Spirits Council even revealed that whiskey cocktails are the millennials’ (22- 35 years of age) new favorite. One of my friends also said that lately, she enjoys more the rare combination of sweetness and boldness of whiskey cocktails.

Now if you are curious as to what type of whiskey might suit your palate, please read on:

“What is best for my weight?” This question matters to you if you need to maintain or shed off some pounds.

Vodka should be one of your best picks if you want to lessen your calorie intake. On average, vodka has approximately 97 calories per shot (30 ml) – one of the lowest among alcoholic beverages.

You should also remember that higher alcohol content means more calories. In 94-proof vodkas, calories increase up to 116 per shot.

Maybe you are now wondering if flavored vodkas have extra calories too. The answer is not really. Some have few more calories than the unflavored ones, but not so much. Popular choices like Smirnoff Citrus Vodka have only e.

Whiskey is also a diet-friendly indulgence. This well-loved spirit has approximately 97-116 calories per shot. Among all whiskeys, the 80-proof has the lowest calorie content.

On the other hand, whiskey cocktails contain more calories than neat and on the rocks. You might want to drink these spirits in moderation if you want to lose some pounds. If too challenging, you can also try mixing it up with low-calorie diet sodas or coffee.

History reveals that our favorite spirits were originally intended for medical use. So, it should not come as a surprise knowing that vodka and whiskey have many benefits to your health.

Aside from low-calorie content, vodka has zero carbohydrates and fat, and low sodium content. Reviews made by Mayo Clinic also suggest that regular and moderate drinking of neat vodka reduces cholesterol level, sugar level, pain, and inflammation. Thus, it is best recommended for people with heart disease, diabetes, and arthritis. It also has disinfectant and antiseptic properties that can be used to clean wounds, skin, mouth, and even household surfaces.

You may also hear from some friends that if you want to chill and relax, vodka is the best drink out there. There is some truth to this, as vodka can relieve stress better than most alcoholic beverages.

Whiskey also has health benefits promised to its consumers. It can regulate cholesterol, stress, and sugar levels in the body, reducing risks of heart disease and diabetes. A shot or two can also aid your digestion and boost your immunity.

Studies also claim that whiskey can help in fighting cancer because of a compound called “ellagic acid” that can absorb abnormal and defective cells in the body.

You are probably thinking this, “…So, what drink will get me drunk?” I don’t mind, honesty. Some people drink to get drunk, to get wasted, to get emotional. And to answer your question, both vodka and whiskey can give you the same level of drunkenness. Elevated spirits, confidence, and aggressiveness are all in the package. However, you might reconsider your liquor once you hear the dreaded word – hangover.

Who loves hangover? I certainly do not. Having fun during the night and suffering the next morning are two completely different stories.

Scientific publications state that hangovers are caused by fermentation by-products called congeners. These toxins are found in alcoholic drinks with darker colors. Experts suggest that these chemicals cause severe hangover conditions like vomiting, nausea, headaches, and stomachache.

Whiskey is one of the alcoholic beverages with the highest congeners content, while vodka contains one of the least. So, vodka will less likely cause a hangover the next morning.

Always remember that one’s choice of liquor is always personal. You should go for what makes you feel better. As for me, I’d probably go for some vodka tonight. My personality and hate of hangover are perfect with vodka’s simplicity and subtleness. So, what’s yours?