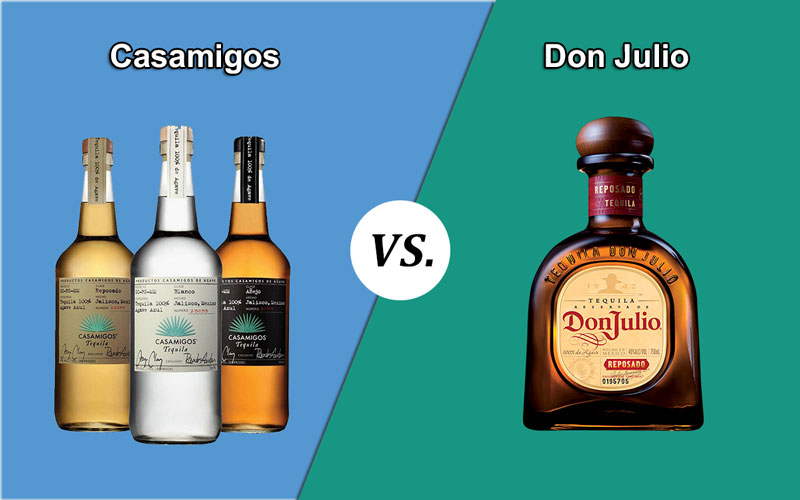 Casamigos and Don Julio are two of the most popular tequila brands you’ll find these days, each one with its distinct identity. While they differ in several aspects, the primary difference between these two types of tequila lies in their flavor.

The Casamigos tequilas tend to have a smoother yet still highly flavorful taste, making them easier to sip than other tequilas. They’re also generally subtle and light, so you can mix them in cocktails without worrying about the tequila overpowering the other ingredients and vice-versa.

On the other hand, the Don Julio tequilas feature more traditional and robust flavors, allowing them to blend perfectly well in most cocktails. However, it can be more challenging for those unused to tequila to sip these tequilas neat.

Apart from flavor, these two tequila brands have other differences as well, which this article will discuss further below.

So, how else are these two tequilas different?

Another primary difference between these two tequilas is the ingredients used to make them. All Casamigos tequilas are made entirely from Blue Weber agave sourced from the Jalisco highlands. However, the agave should be aged 7 to 9 years old before being harvested for use.

Meanwhile, Don Julio tequilas are also made from Blue Weber agave, specially handpicked from the Jalisco highlands. However, unlike Casamigos tequilas, the agaves used for Don Julio tequilas should be aged 7 to 10 years old before they harvest them. 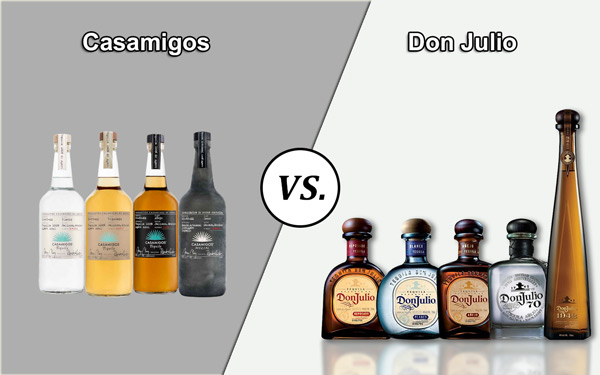 The price for these tequilas varies, depending on which variant you choose. However, in general, Casamigos tequilas tend to be more budget-friendly than Don Julio tequilas, which are considered top-shelf.

As mentioned, Casamigos tequilas tend to have smoother and lighter flavors than Don Julio tequilas, which make them easier to sip on, even neat. However, there are specific differences among the different variants in terms of flavor. The same goes for Don Julio tequilas.

Casamigos Blanco vs. Reposado vs. Añejo

For example, the Casamigos Blanco features a sweeter and more vanilla taste with only some mild pepperiness and spiciness. You can also taste some minty notes with this Casamigos tequila.

On the other hand, the Casamigos Reposado has a creamier and smoother flavor, with strong notes of vanilla, caramel, almond, butterscotch, and agave.

Lastly, the Casamigos Añejo has a richer aroma and flavor, typically compared to that of scotch. It’s creamy and sweet, hinting at a few notes of vanilla, honey, and sweet tobacco.

Meanwhile, the Don Julio Reposado features a richer and sweeter taste, with strong citrus, vanilla, oak, and caramel notes, giving it the perfect balance between spicy and sweet.

Lastly, the Don Julio Añejo has a fruitier and more floral taste, with hints of rose, cinnamon, pear, and wood. These give it a unique freshness that the other versions don’t have.

Casamigos is the better option if you’re looking for something that’s easy to sip but doesn’t lack the flavor tequilas are known for.

However, if you’re looking for something more traditional, the Don Julio Blanco can be the better choice. It’s also considered the standard for most top-shelf tequilas.

Don Julio tends to be the better choice when it comes to the Reposado tequilas as it offers a better balance between sweet and spicy, making drinking this tequila quite the experience.

For the Añejo, both tequilas have their distinct differences. The Casamigos Añejo tends to have a richer flavor than the Don Julio Añejo, which is lighter and fruitier. If you’re looking for something to mix into cocktails, the Don Julio is typically the better choice.

Casamigos or Don Julio: Which Is Better? 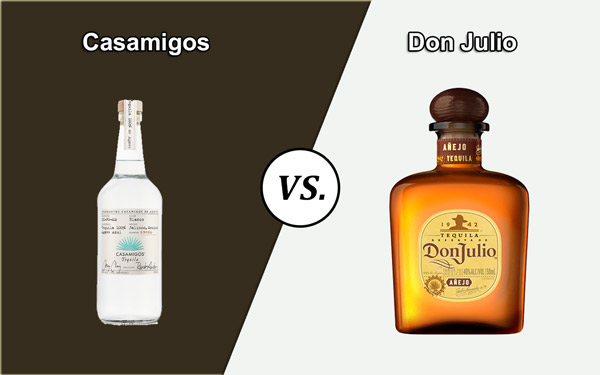 While it ultimately depends on your preferences, Casamigos is generally the better choice if you’re not used to the strong taste of tequila and want something that can go down more smoothly and easy enough to sip on its own.

However, Don Julio tends to be the better option if you’re looking for a classic tequila that you can mix in with your cocktails due to its more traditional flavors. These allow Don Julio tequilas to blend perfectly with tequila-based cocktails.

Overall, both these brands are excellent options for tequila lovers; it ultimately just boils down to your personal preferences. Don Julio has set the standards for what a superb tequila should be. Still, Casamigos makes it easier for beginners to get used to the taste.

With that said, you can never go wrong with either a Casamigos or Don Julio when it comes to tequila. So, make sure to try them both and see which one better suits your tastes.