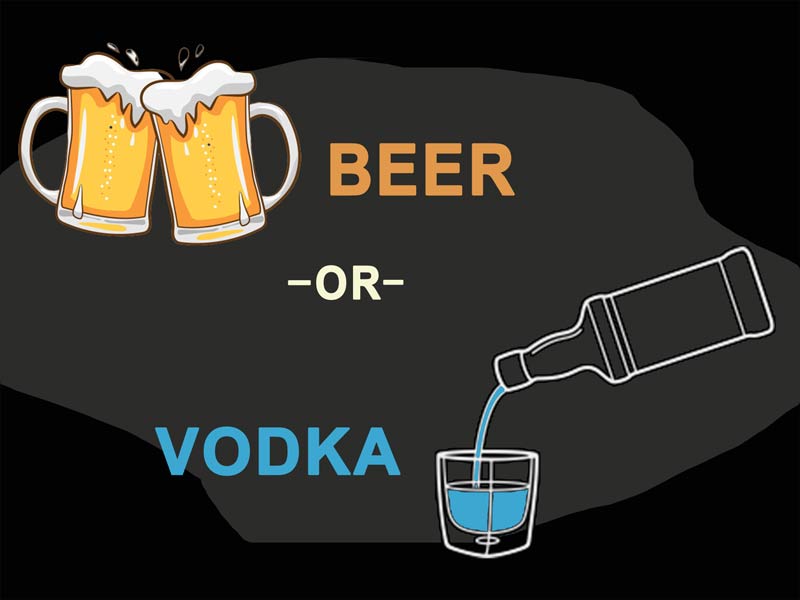 Both beer and vodka are alcohol beverages. However, they are as different as chalk and cheese. One is fermented while the other is distilled. One has little alcohol by volume (ABV) content, while the other has a high ABV.

Though both beer and vodka are popular worldwide, there are still plenty of differences between them. This article will compare them and see what these differences are.

Quick Navigation
Beer vs. Vodka – A Closer Look at Their Differences
Brief Histories
Taste
The Process and Ingredients
Alcohol Content
Beer or Vodka: The Higher Calorie Drink
Uses of Beer and Vodka
Can You Mix Beer and Vodka?
Final Verdict

Beer vs. Vodka – A Closer Look at Their Differences 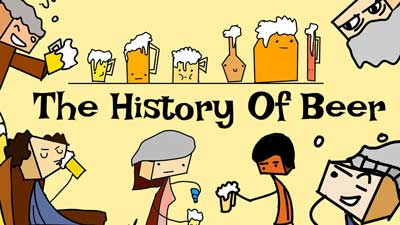 Beer seems to have been present since ancient times. There is evidence of beer being produced and consumed from around 8500 BC. There are beer recipes from ancient Egypt.

However, many people associate the spread of beer with Germanic and Celtic tribes. Beer was even used as wages in some places. Moreover, some ancient Egyptians were buried with many barrels of beer. 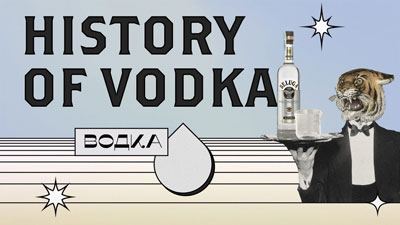 Vodka, on the other hand, seems to have descended from being a medicinal compound. Early records show that vodka was used as a disinfectant and cleaning agent. After all, it is just ethanol and water.

There is a bit of confusion as to where vodka originated. Some say it has its origins in Russia and Poland. Nowadays, it is manufactured and consumed all over the world. 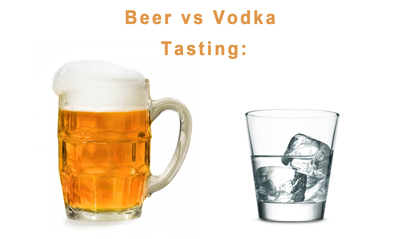 When it comes to taste, beer is described to have a more robust flavor than vodka. In fact, vodka can even be described as virtually tasteless.

This is due to the process of distillation, which eliminates almost all the flavor in vodka. Because of its lack of distinct taste, vodka is a popular addition to many cocktails.

On the other hand, beer is described to have a bitter flavor that many people dislike. This distinct flavor is due to the hops added to the beverage after it’s finished brewing. Hops are added to make the drink last longer as well as retain its foamy nature.

The Process and Ingredients

Beer is made using a process called brewing. It can also be brewed at home. The main ingredient in beer is the cereal grain, mainly barley.

However, wheat, rice, and corn can also be used. Another critical component is yeast. This is used to aid in fermentation. After these, some hops are added to give beer the distinctive bitterness. 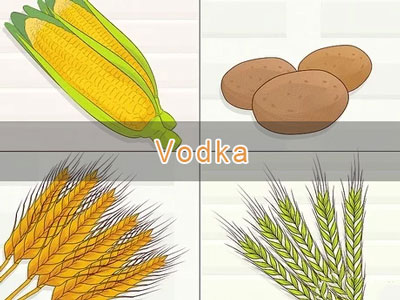 Vodka, on the other hand, can be made from any cheap material with high starch content. It was made from potatoes earlier, but now cereal grains are also used to produce vodka.

There is a brand of vodka called Ciroc, which is made from grapes. Vodka is distilled, sometimes twice, to produce a clear, colorless, and tasteless liquor. 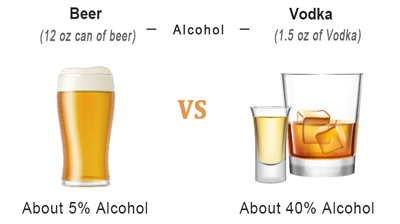 Beer has various flavors and forms. Beer can be sweet or bitter. You can get pale beers and strong beers. Even some ales and meads are classified as beer. Beer is available all over the world and is consumed in significant quantities.

Beer is generally consumed in beer mugs. Chilled beer is preferred. Some ladies like to drink beer combined with other beverages, which is called shandy.

Beer is available in bottles, cans, and even in pressurized kegs as draught beer. These days many versions of flavored beer are available, known as Indian Pale Ales (IPAs).

Vodka, which means ‘small water,’ is typically consumed neat. It is either consumed slowly to savor the drink or downed as a shot. However, since it is tasteless, it is mostly used as a component in cocktails. The more famous ones are the Screwdriver, the Bloody Mary, and the White Russian. 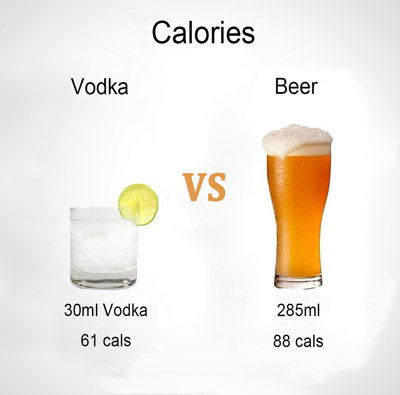 You have heard of beer bellies. That is because beer has a high carbohydrate content. Beer is associated with big fat bellies.

Vodka, on the other hand, is non-fattening. Even though vodka is distilled from starchy materials, all the carbohydrates are distilled out.

That said, vodka does not contribute to you getting fat, no matter how much you drink. However, what does contribute to Vodka drinkers putting on weight is the eating that accompanies the drinking. Overall, beer has a higher calorie content compared to vodka.

Uses of Beer and Vodka

Vodka has been used as a disinfectant on wounds. This is because it is just ethanol and water.

On the other hand, beer cannot be used on wounds as it would only make things worse and could even lead to death. Vodka can be used as a cleaning agent. Beer would make things sticky.

However, beer, particularly stale beer, can be used to strengthen your hair as a shampoo. Moreover, many people love beer-battered food. These are marinated in beer, put in a batter, and fried.

Additionally, once you open a bottle or can of beer, you have to consume it immediately. Otherwise, it will go flat. However, you can open a bottle of vodka and use it for some time with no loss of effectiveness.

Beer is usually a summer drink to be drunk chilled. However, you can drink vodka all year round.

Can You Mix Beer and Vodka?

While mixing the two doesn’t do much to the flavor as vodka is mostly flavorless, it’s still a popular combination for cocktails.

In fact, there are several recipes for beer-vodka combinations, such as the Moscow Mule. The Moscow Mule is a famous cocktail that involves mixing lime juice, vodka, and ginger beer and dates back to World War II.

Beer or vodka, which is the better drink? That is a matter of choice. People all over the world love their chilled beer. An almost equal number of people love their vodka. Beer and vodka are as different as can be but practically equally loved the world over.