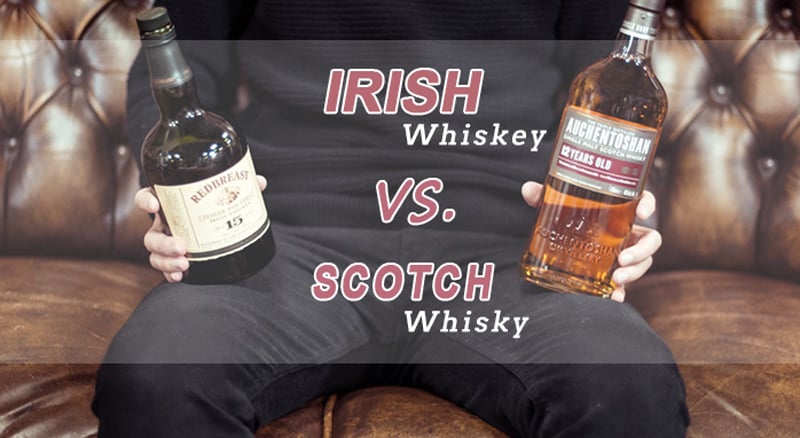 For the casual drinker, there’s not much difference when it comes to whisky. However, similar to wine, there are several variations of whisky out there.

It’s whiskey for the Irish – take note of the e, while for the Scottish, it’s scotch. However, aside from the spelling, there are more differences between Irish whiskey and Scotch.

For example, one of their main differences is the taste. Irish whiskey generally has a smoother and sweeter flavor than Scotch whisky because it comes from unmalted barley. On the other hand, Scotch is made from malted barley, so it has a heavier taste than the former.

Nevertheless, their differences don’t end there. From their distillation process to their aging, you can learn more about these drinks’ differences below. 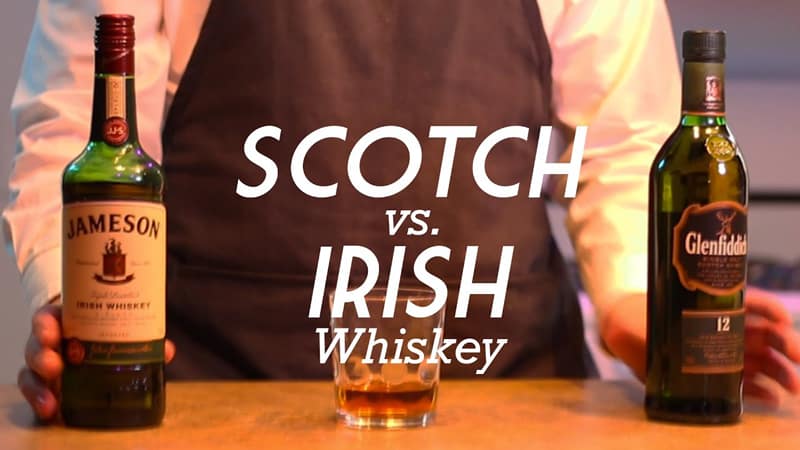 As mentioned earlier, one of the main differences between Scotch and Irish whiskey is their taste or flavor. With Irish whiskey, you get a smoother and sweeter flavor as it’s generally made of unmalted or green barley.

Because of its sweeter taste and smoother flavor, it’s more popular as part of blends compared to Scotch.

Meanwhile, Scotch whisky is made from malted barley, which gives it that distinctly full and heavy flavor. This can be too powerful of a taste for some, which is why blended Scotch whiskies have become more popular than single-malt Scotch.

Blended Scotch whiskies tend to use a mix of malted grains, giving it a smoother flavor than single-malt Scotch.

Perhaps another major difference between the two is the number of times they are distilled. Irish whiskey is distilled three times, one time more than Scotch, which is only distilled twice.

This is notable because the triple distillation process is what gives Irish whiskey its sweeter and smoother taste than Scotch. This makes it taste lighter as well, which makes it easier to go down.

On the other hand, Scotch is distilled twice and uses a variety of copper pot stills. Irish whiskey uses similar tools, although they tend to have fewer varieties.

As you already know, Scotch whisky is from Scotland, while Irish whiskey is from Ireland. However, it’s not merely their origins that are different. According to the 2009 Scotch Whisky Regulations, Scotch whisky should always be created in Scotland – from the fermentation stage to its bottling.

Meanwhile, the 1980 Irish Whiskey Act states that Irish whiskey must be created in the Republic of Ireland, or more commonly known as Northern Ireland. This also applies to every stage of production – from fermentation to bottling.

Although this can vary from brand to brand, Scotch whisky is generally pricier than Irish whiskey. This is particularly true with aged Scotch whisky.

It may not be a big difference but still a difference, nonetheless. Irish whiskey spells the drink with an “e,” while the Scottish prefer to leave it out. Both are correct, however, and most foreign countries tend to stick with the spelling they were first introduced to.

Now that you know their differences, it’s time to learn about their similarities.

One of their similarities is the minimum number of years they are aged. Both Scotch and Irish whiskey are aged for a minimum of three years before they’re sold. This is because aging whisky is vital to its taste. The longer you age whisky, the smoother its flavor is.

Another similarity is that both use either ex-Bourbon casks or Sherry casks. While they can use newer casks, many still prefer to use barrels that were previously used to age another type of drink. Both Scotch and Irish whiskey must use oak casks for the maturation process.

Since Bourbon can only use new casks, Bourbon makers can’t reuse their barrels to age their drink. Because of this, there’s a surplus of ex-Bourbon casks. Spanish Sherry casks can also be used, but these are considerably fewer than ex-Bourbon casks.

The type of cask used can also make a difference in the whisky’s flavor. For example, Bourbon casks tend to impart a sweeter taste to whisky, while Sherry casks tend to bring out the spicy and fruity notes of the drink.

Which Is Better: Scotch or Irish Whiskey?

There’s really no right answer in terms of which is better, Scotch or Irish whiskey. This is because it entirely depends on who’s drinking it and their preference. While some prefer Scotch’s more robust flavor profile, some feel overwhelmed by it.

Because of this, they tend to prefer the smoother taste of Irish whiskey. Nevertheless, both drinks are excellent, especially once you can distinguish them from each other.

They may be both whiskies, but there are certain differences between Irish whiskey and Scotch that allow each one to be distinct in their own way. While the most noticeable distinction is in their taste, they also have other differences, such as the number of times each one is distilled.

Regardless, they also share similarities, similar to the countries from which they originated – sharing characteristics while different in their own way.

Nevertheless, the only way you can truly see how different both drinks are is by trying them out. Hopefully, with the information you learned, you can now differentiate each drink by its distinct characteristics and appreciate what each one has to offer.