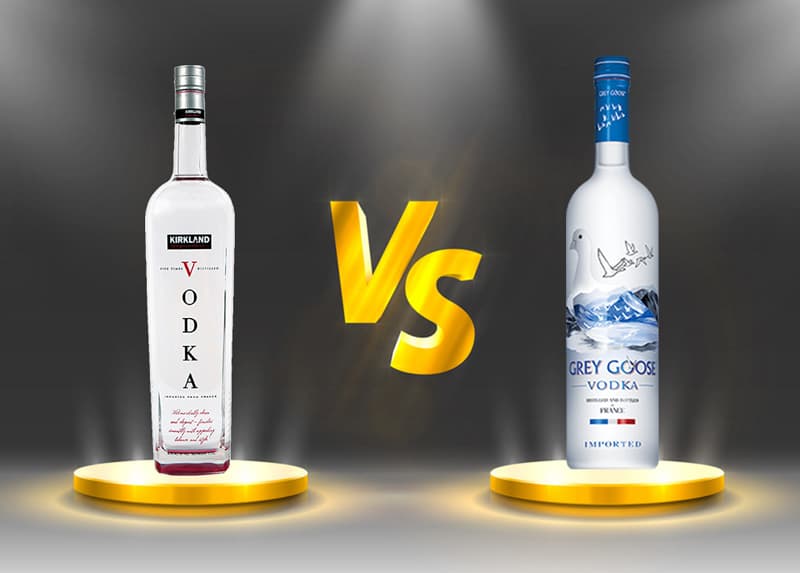 Rumors have long been arising that Grey Goose and Kirkland Vodka are just made of the same ingredients and would only differ in its price.

The unending comparison between the two drinks involves the belief that the water source for both products originated from the springs of Gensac which is situated in the Region of Cognac in France.

However, these two are quite different both in price and taste. Kirkland vodka is distilled five times and has a peppercorn bite. On the other hand, Grey Goose has a lemon pith and white pepper flavor. Also, Grey Goose costs three times more than Kirkland vodka.

Vodkas manufactured by Grey Goose are seen as the epitome of success in the world of first-class vodkas. The company was founded by New York entrepreneur Sidney Frank during the 1990s.

Later, he sold the ownership rights to Bacardi for almost two billion U.S. dollars and began making a mark in 1997. Bacardi managed to sustain the marketing of Grey Goose which led many to believe that their vodka is the finest in the market.

On the other hand, Kirkland vodka is made by an enterprise, LeVecke Corp., located in Mira Loma of California.

Bacardi’s Grey Goose claim that their water source is an exclusive well from Gensac, France. The brand utilizes excellent quality wheat that is gotten from three farms. It undergoes the best milling method available in the market.

Afterward, it is distilled at a facility in Cognac of France that is roughly 800 kilometers away from where Kirkland vodka is processed. Its smooth and explicit taste is produced by the Master of the Cellar, by mixing French wheat from Picardy and spring water.

Kirkland is also made in France and purified out of grain. Their product is distilled five times to ensure that it produces the ultimate purity and refinement. It is considered one of the finest vodkas out there. It is bottled at Distillerie De Gayant.

Fred Minnick, a skilled taster of vodkas or spirits, believes that first-rate vodka is promotion and advertisement because the raw ingredients in it are not intended to be tasted. He gave us the impression that there might be brands of vodkas that are overpriced but tolerated due to the reputation the company has.

Vodkas are distilled, sometimes several times, which takes away the flavoring of the mixture. Thus, they almost taste the same. This is also the reason why some choose to drink it with a strongly flavored mixer such as orange.

However, some individuals claim that Grey Goose has a crispy taste with a touch of burnt charcoal. It also sweet and vanilla-like taste.

However, unlike Grey Goose, Kirkland Vodka is fancier to the taste. It somehow has a bright and clean flavor with some hint of sweetness. This perhaps closely resembles a citrus aftertaste. Kirkland can be a good choice when drinking vodka on the rocks or straight.

Kirkland Vodka was able to beat Bicardi’s Grey Goose in several blind taste examinations. If you are searching for a top-quality but cheap vodka drink, then you may consider this one. It is priced at around $20.

On the other hand, the premium vodka Grey Goose is sold at about three times the price of Kirkland. It often costs approximately $60.

Whether there is truth to the allegations that the vodka produced by both Grey Goose and Kirkland are just the same, will remain to be discovered. Only those who are actively involved in the manufacturing process of the two brands can put an end to these hearsays.

What about you? Do you think there are differences in the ingredients of the two brands? If there is none, would you buy the cheaper Kirkland over the high-end Grey Goose?

Feel free to share your insights and we will be glad to listen to them.