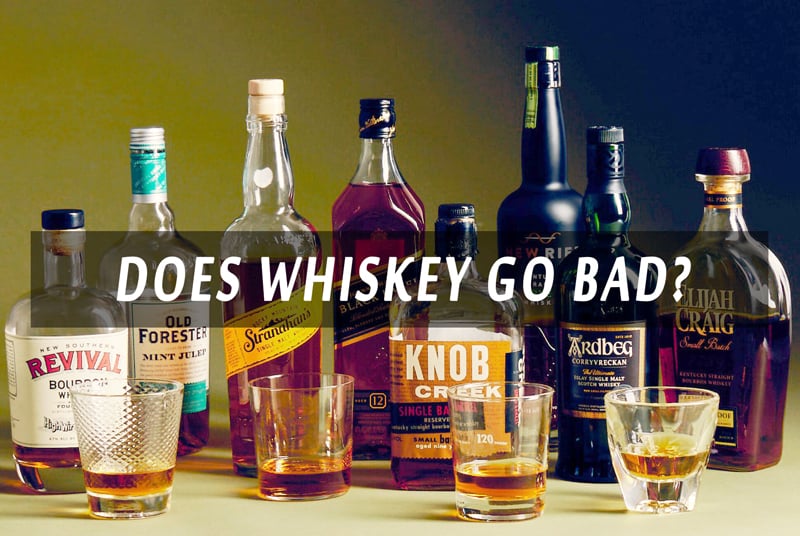 Whiskey does not go bad until you open them. And even then, it takes a long while for them to spoil. Depending on how you store opened whiskey, they can last you a few years to a couple of months.

In this article, you will be able to learn more about whiskey and its properties.

Quick Navigation
How Long Does Whiskey Last?
Does Whiskey Go Bad After Opening?
How To Store Whiskey?
How To Tell If Whiskey Is Bad?
The Final Verdict

How Long Does Whiskey Last?

Unopened whiskey can last for many years. Since it’s sealed, the whiskey isn’t exposed to oxygen so the taste won’t change. Also note that just because the bottled whiskey is unopened doesn’t mean it still ages.

Whiskey only ages during the process where it is put in an oak barrel. Once the whiskey is bottled and sealed with a cork, the aging process stops.

Opened whiskey is another story. Once exposed to oxygen, the quality of whiskey changes. Usually, they become smoother, which is a good thing.

The only downside of opening whiskey bottles is the alcohol content evaporating.

An example is a half-full whiskey bottle that lasts around 1-2 years and a quarter full of whiskey is judged to last about 6 months.

Does Whiskey Go Bad After Opening?

No. Whiskey does not just go bad after opening.

You need to store them properly to prolong their shelf life. This includes putting them in a dark, dry storage area like a bar cabinet. You also need to make sure the cork is properly sealed tight to prevent the alcohol content from evaporating.

How To Store Whiskey?

To store unopened whiskey, the bottle should be placed upright. Whiskey bottles must be kept in storage areas that provide constant and below room temperatures but not too damp. Damp environments can cause the cork to mold. Changing temperatures can trigger the liquid to expand and contract, which results in oxygen absorption and alcohol evaporation.

Good places to store whiskey are in a pantry, a bar cabinet or a wine cellar.

The best way to store whiskey is to put them away from direct sunlight. Any contact with UV light changes the color of the whiskey.

If you store whiskey at cold or freezing temperatures, you might notice the liquid becoming cloudy. This is normal and will become clear after a while.

How To Tell If Whiskey Is Bad?

Normally, as long as you properly store the whiskey after it’s opened, it has a long shelf life. The only reason whiskey would turn bad is if it is improperly stored – like not making sure to properly close the cap after pouring, or leaving the pourer on.

To check if the whiskey has turned bad, it’s best to smell and take a small sip. If the whiskey tastes strange or gets contaminated by impurities, then it’s time to throw them away.

Knowing how to properly store whiskey goes a long way in keeping its taste and flavor. Not only does it have an amazingly long shelf-life, it also ends up having a smooth texture.

Improper storage of whiskey is a sure-fire way of spoiling them – especially putting them in damp basements or under direct sunlight.

Chances are, whiskey can last for a long time.