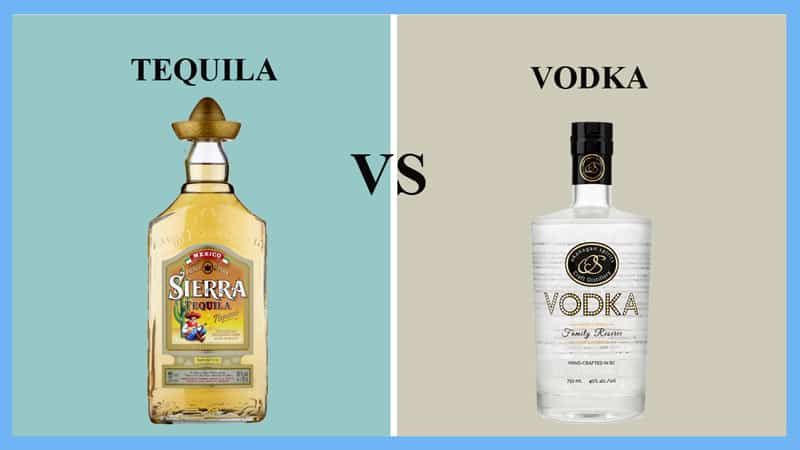 Tequila and Vodka, two of the most popular spirits around the globe. Most adults have seen or heard of these two, even though they may have not tried it. In this article, we’ll discuss the various differences the two have and see which one is the right spirit for you.

The only major similarity tequila and vodka have is that both are clear spirits that have an average of 40% ABV (Alcohol by Volume). We’ll give a summary of a few differences between vodka and tequila which we’ll expand on later in the article.

Vodka tends to have higher calories than tequila while tequila has more flavor. For the pricing, an average tequila will cost more than your average vodka. Do note however that the calorie, carbs, and sugar counts of these two spirits will heavily depend on the type of drink it mixed in.

When it comes to pricing, the higher quality of the spirit, the pricier it gets. Even so, you can still find a fairly decent average tequila or vodka bottle around the $20 – $30 price range. However, you should know that vodka is less exclusive than tequila, making it less expensive as a whole.

The taste of tequila will heavily depend on numerous factors. These include the percentage of Blue agave used, what container it is aged in, how long it is aged, and also which region it is produced from. Pure tequilas that are made from 100% blue agave will have a very distinct earthy, a little sweet, and agave flavored taste.

However, the younger the tequila is, the more alcoholic bite it has. Younger aged tequila will have less of its distinct flavor and thus will be less expensive.

On the other hand, vodka is a flavorless spirit, but individuals with refined palettes will notice the slight differences in flavor and texture of different vodkas. There are different types of vodkas There are also fruit vodkas that can have flora flavors. Rye vodka is also available which has a full flavor to it, some even report that it has a hint of spicy flavor to it.

There is also the traditional potato vodka which has a slightly creamy flavor but still colorless. Lastly, there are flavored vodkas where the taste depends on which flavoring is used.

With spirits and calories, you need to keep in mind that the higher the ABV% (Alcohol by Volume), the higher the calorie count will be. This is a great general rule of thumb to follow. Alcohol has its own category when it comes to measuring calories. Alcohol has an average of 7 calories per gram. Compared to protein and carbohydrates which both have 4 calories per gram.

Tequila enthusiasts and fans claim that tequila has fewer calories per shot compared to vodka. This may be correct but it will heavily depend on the alcohol percentage of the shot. Let’s compare two of the most popular vodka and tequila brands in the USA. For Tito’s Homemade Vodka, 40%, a 1 oz. shot will have 65 calories. On the other hand, the same shot of Jose Cuervo Gold tequila, 40%, contains 69 calories.

The number of calories will largely depend on the alcohol content, the brand, and what type of drink the spirit is mixed in.

Carbs In Tequila vs. Vodka

Pure tequila that is made from 100% blue agave surprisingly contains very low carbohydrates and calories. The same is true for pure vodka. It contains little to zero carbohydrates. Both of these spirits have zero nutritional value on them. This is true for other distilled spirits as well. This means that both pure tequila and pure vodka won’t add much to the carbohydrate count.

However, what ingredients these spirits are mixed in will have an impact on how much carbohydrates a drink has.

Sugar In Tequila vs. Vodka

Even though both tequila and vodka start as food with plenty of sugar, the fermentation and distillation process eliminates all of the sugar presents in both drinks. Pure tequila and vodka do not contain any sugar. The amount of sugar will depend on the type of drink it’s mixed in.

Is Tequila Stronger Than Vodka?

Which spirit is stronger is a relative term. It may refer to the flavor, but we’re going to Your average tequila and vodka has 40% ABV, which ties them up. However, some vodkas can reach up to 95% alcohol content while tequila maxes out at 60%.

Everyone should know the health impact of what they drink. For tequila and vodka, there are no significant health benefits. Some sites on the internet may claim that tequila is diabetic-friendly, a great addition to your weight plan, or is diabetic-friendly. This is all baseless claims without scientific evidence. Tequila is a great low-sugar alcoholic beverage, however, it isn’t a health drink.

Can You Mix Vodka And Tequila?

The Final Verdict: Tequila or Vodka

Tequila or vodka, whichever the winner is depends on your personal tastes and preferences when it comes to drinks. You can even mix both of them in a fruity martini. If you ask us, we prefer the versatility and alcoholic bite that vodka has to offer.