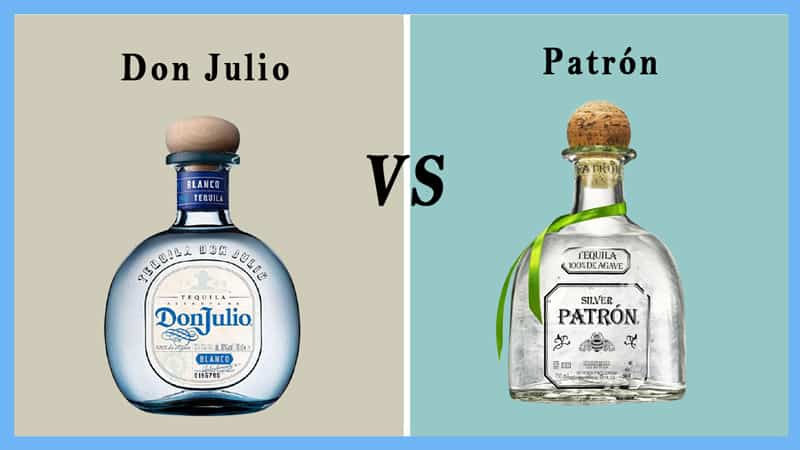 Don Julio and Patron are among the best premium tequila brands worldwide. However, despite being both tequila drinks from Mexico, they significantly differ in a lot of aspects.

One of the biggest differences between the two brands is in their production process. Although both brands use Agave as its main ingredient, Don Julio cuts its pinas in even pieces while Patron crushes the Agave by using a tahona and miller.

Aside from that, Patron is slightly more affordable than Don Julio. At the same time, Patron also has more varieties than Don Julio. But, Don Julio is preferred by many due to its excellent and clean tequila taste.

Are you debating on whether you should opt for Don Julio or Patron? If yes, then you are on the right page. In this article, you will learn about the difference between Don Julio and Patron in terms of branding, taste, price, and many more.

Don Julio is a game-changing brand that has become the world’s largest brand in terms of value. It’s founder, Don Julio González-Frausto Estrada, began distilling at the young age of 17.  In the next 40 years, he will continue to develop his tequila-making process. He initially made tequilas for friends but only in 1985, he launched his namesake brand, Don Julio. (https://en.wikipedia.org)

Their best-selling variety is Don Julio Blanco which is also referred to as “silver tequila”. It is the base from which their other variants are derived.  Their other varieties available globally are:

Patron is the second best-selling tequila produced in Mexico by Patron Spirits Company. Apart from the drink, they also produce their bottles and corks at their facility called Hacienda Patron. It became a well-known tequila because of repeated references in hip hop culture and country music. This can be credited to their CEO, Ed Brown who applied the lifestyle advertising strategy.

Patron’s silver tequila goes for $50 while their top-shelf Patron en Lalique: Serie 2 can do damage of up to $7,500.  Patron’s most favorite variant is the Reposado Tequila because of its smooth taste with hints of cooked agave, citrus ginger, and wood.

Aside from their pure tequila variants, they also have their premium coffee-flavored tequila line called Patron XO Café.  If you are looking into getting some Patron, here are just some of their other variants:

Don Julio and Patron are both premium brands and honestly, you can’t go wrong with any of them.  Let’s compare them in different categories so you can make the most of your party.

So, let’s get down to it.  We will be comparing their basic silver tequilas so we can compare head-to-head.  Remember that taste is subjective and our experience may not be the same as yours.

Don Julio Blanco has a smooth taste with citrus notes such as lemon, lime, and grapefruit. It has a taste and finish of light, sweet agave flavor.  Patron Silver has almost the same citrus aroma and sweet taste but with a light pepper finish.

If you’ll ask seasoned drinkers, Patron has a fine taste but Don Julio has a more flavorful and smoother taste.

Patron has a neutral tequila taste that goes well with fun cocktails like margaritas and Palomas. As a shot, it has a simple straightforward taste which will be appreciated by most drinkers.

Don Julio, on the other hand, has more character in its taste and is very sippable. It’s more enjoyable to drink it as is than mix it or do lemon-lime shots in with it. The play of citrus and agave flavors is what pulls it away from Patron.

If you are looking for other options, some tequila enthusiasts have mentioned El Tesoro Tequila and Tequila Fortaleza as their new favorites in terms of taste. You can check them out also to add an interesting mix to your party.

If you are looking to wow your guests, then we recommend getting your Patrons. Patron has doubled down on its advertising to be the visible choice of celebrities. At the helm of its CEO, Ed Brown, it has been synonymous with sophistication, class, and success.

Their bottles are also exquisitely made, hand-numbered, and very presentable. The Patron en Lalique: Serie 2 justifies its $7,500 price tag not only with its taste but with an elegant crystal bottle.

Don Julio, on the other hand, is best for seasoned drinkers who appreciate the fine taste. Don’t be fooled though, some Don Julio tequilas have exquisite packaging such as the Don Julio 1942 and the Don Julio Real.

How much will you shell out to get drunk Jalisco style?

Both Don Julio and Patron are excellent tequilas to bring to your party. It boils down to the people you’ll be drinking it with (or even just you, we’re not judging).

If you are in the company of people who know a good drink when they see it, we recommend Don Julio by a long shot. However, if you want glam and a good time, we recommend the Patron to make your party extra.