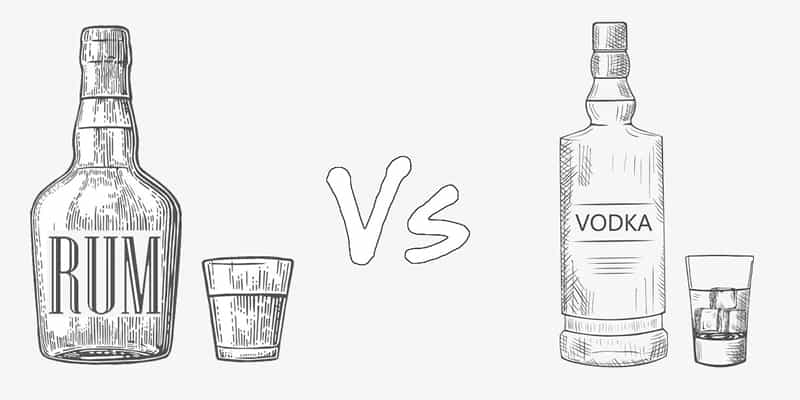 Among all of the available hard liquor options in the market, two of the most popular and most versatile options are rum and vodka. Each one is used as the base for more complex and delicious alcoholic beverages like cosmopolitans, daiquiris, among others.

However, they also have differences that make each one distinct in their own way. For example, rum isn’t just used for cocktails or alcohol-infused punches – it’s also used as an added ingredient in baking, cooking, and even ice cream.

On the other hand, the often flavorless nature of vodka makes it the perfect option to be combined with other flavors to make delicious cocktails.

If you want to learn more about the difference between rum and vodka, read on below.

What’s the Difference Between Rum And Vodka?

As mentioned, despite their similarities, both vodka and rum have unique qualities that make them distinct from one another. One of the major differences they share, aside from appearance, is the distillation process they undergo.

Rum is made by fermenting and distilling molasses or sugarcane juice that is then allowed to age in oak barrels. It ages faster in a tropical kind of weather, making it a popular product in tropical countries. It’s considered better tasting than vodka because of its molasses content, giving it a sweeter taste than vodka.

On the other hand, vodka is created by distilling wheat, potatoes, or rye. Unlike rum, it doesn’t require any aging process unless it’s going to be used as a component for whisky. As mentioned, it’s often flavorless so it’s perfect as the base liquor for cocktails like martinis, screwdrivers, and cosmopolitans.

Another major difference between the two is their color. Vodka, unless mixed with other ingredients, is often crystal clear. Meanwhile, rum often has a brown or golden color due to the aging process it undergoes.

However, some rums have a clear appearance as well and these are usually the filtered ones. Filtering rum is designed to remove the color caused by the aging process.

The average price of a Rum bottle is between $11 to $30 dollars. What makes some brands more expensive than the others is mainly affected by the distillation process’s main ingredient. Typically, Rum that is distilled using molasses is more affordable than those manufactured with sugar cane.

Molasses is a cheaper raw material. Many sugar refineries consider this as a scrap product from sugar production. However, that is not the case for sugarcane. Sugarcane only grows in a few parts of the world, and its yields are so little, which means it is a more labor intensive material to source.

When you compare Rum prices to Vodka, you will not notice a huge difference. A bottle of decent Vodka generally cost between $20-$30 dollars. However, premium-quality ones tend to cost more as well as flavor-infused vodkas.

Since Rum is mainly made from sugarcane or molasses, it has a naturally sweet taste. In contrast, the Vodka has a briny water flavor combined with a hint of spiciness.

On its own, Rum generally tastes smoother and sweeter because Vodka’s flavor is somewhat muted. However, suppose you are looking for a beverage for cocktails. In that case, Vodka is much better because it dilutes other drinks without distorting their individual flavors.

Does Rum Have More Calories Than Vodka?

Rum and Vodka that are 80-proof both have roughly 97 calories per shot. However, their calorie content might differ from one brand to another. Some brands with added sugar or spices might affect the overall calorie content of the beverage.

The standard alcohol content of Rum is 40% ABV. However, some Rums are “overproof.” These typically contain a minimum ABV of 57.5%.

In contrast, Vodka also has a standard 40% ABV. Just like Rum, some Vodka brands may contain higher alcohol content.

Sugar In Rum vs. Vodka:

Does Rum Have More Sugar Than Vodka?

Although Rum is made from sweet raw material such as molasses and sugarcane, the finished product does not necessarily have a higher sugar content compared to Vodka. However, some brands of Rum add sugar in the finished product to achieve a certain degree of sweetness in its taste.

Is Rum Stronger Than Vodka?

When you look at the ethanol content of standard Rum and Vodka, Rum is not necessarily stronger. Therefore, some Rums are stronger than Vodka and vice versa.

Rum vs. Vodka: Which Is Healthier?

Moderate consumption of Rum is associated with heart health. Several studies also show that it can help reduce anxiety as long as the serving and frequency of consumption is not abused. A moderate serving of Rum is 1.5 oz per day.

Similar to Rum, Vodka is also associated with heart health. It can help increase circulation and blood flow. However, these benefits are only possible when the consumption is moderate.

Is Whisky, Brandy, Rum, and Vodka: Which is Good for the Health?

Between Whisky, Brandy, Rum, and Vodka, the healthiest alcoholic beverage is Brandy. It contains heart-healthy antioxidants and vitamin C. It also has polyphenol compounds that fight obesity, stroke, and heart attack.

Can You Mix Vodka And Rum?

Technically, you can mix Vodka and Rum together. When you do, the mixture will typically have a stronger Rum flavor because Vodka flavor is very muted in the first place. Mixing these liquids will also not affect the ethanol levels of each beverage.

Rum or Vodka,Which is Right for Me?

There are several ways you can evaluate whether Rum or Vodka is a better match for you. One way is by considering your taste preference. If you want a sweet-tasting alcoholic beverage, then Rum is definitely the best choice for you. Meanwhile, if you prefer a smooth and savory taste, then you should go for Vodka.

If versatility is what you are looking for, then you should go for Vodka. It is an excellent drink for cocktails, and it helps enhance the flavors that you add.

It all boils down to personal preference by the end of the day since both beverages do not widely differ in price, health benefit, and alcohol content. Whichever you choose, as long it tastes delicious for you, then you are definitely making a good choice.

Here is a drinking chart of Rum and Vodka cocktails that will help you identify which one suits your preference in the best way possible:

Is Rum better than Vodka?

Rum is not necessarily better than Vodka in terms of health benefits because they have almost the same amount of calorie content. When it comes to taste, it all boils down to the preference of the drinker.

Does Rum or Vodka get you drunk faster?

Some brands of Rum contain higher alcohol content, so those may get you feeling drunk faster than some Vodkas.

Is Rum the same as Vodka?

No, Rum and Vodka are not the same. Rum is mostly made from sugarcane juice, while Vodka's main ingredients are either potatoes or grains.

Is Bacardi Rum or Vodka?

Is Kahlua made with Rum or Vodka?

Kahlua is an alcoholic cocktail beverage that originated from Veracruz, Mexico. It is made with 100% arabica coffee, sugar, and Rum.

Is it Bad to Mix Vodka and Rum?

Mixing Vodka and Rum is bad in the sense that you will increase their alcohol content without necessarily making a positive impact on flavor.

Is Everclear Vodka or Rum?

Everclear is a highly potent vodka since it is distilled using grain. It has a super-strong 94.5% alcohol content.

Is Beer Weaker than Rum or Vodka?

Rum and Vodka are harder drinks compared to beer because they typically have at least 40% ABV while beer only contains less than 5%.