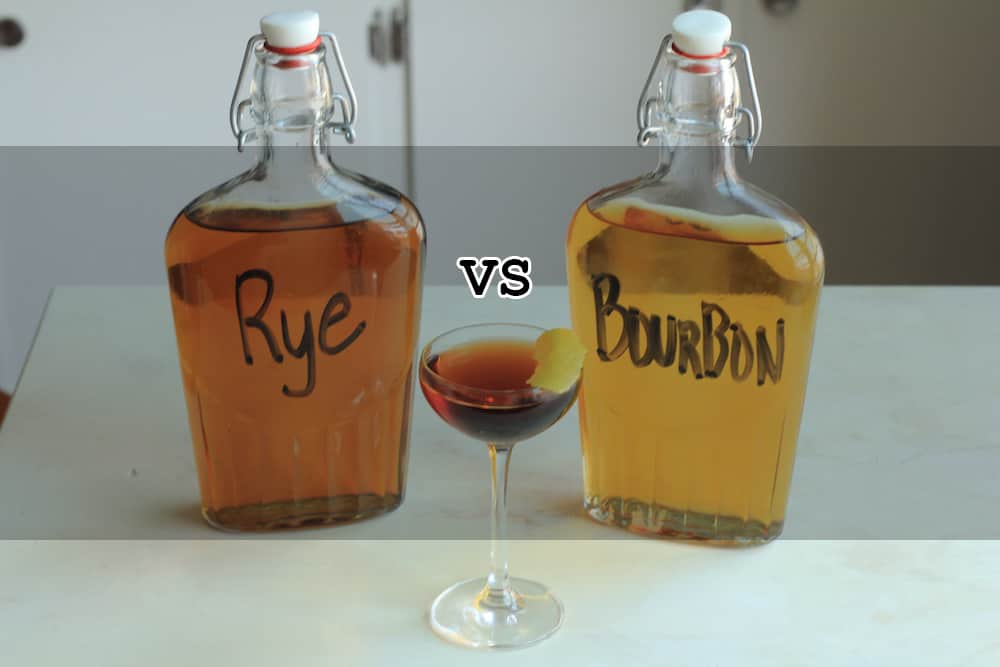 Even if you are not a whiskey connoisseur, you can easily tell the defining difference between Bourbon and Rye once you have tasted them. Rye has a spicy tinge and a dry texture, while Bourbon has a sweeter and full-bodied flavor. Rye whiskey has a specific taste because it is basically rye grain. In contrast, Bourbon has a savory honeyed sweetness from the corn.

You can find below their most comprehensive comparisons among them are their aging process, distillations, and storage.

Let’s begin with their similarities:

Yes, of course, they are both whiskeys

History of Rey Whiskey and Bourbon

Bourbon and Rye had their respective significant beginnings and moments of triumphs in American history. History tells that Bourbon and Rye began its development in 1776 when the British war hindered the trade of sugar used in the production of rum, ending rum production.

Meanwhile, Americans’ love for spirits made their way into distilling from native grains Rye and corn—thus paving the path to discovering Whiskey. Although they made their separate names in American History, Bourbon and Rye is ingrained in every American whiskey drinker.

Bourbon and Rye: Their Birthplace

If you are a native American, when you think about Bourbon, you think about Kentucky. Why is it that Kentucky state became synonymous with Bourbon? It is because 95% of the world’s Bourbon is manufactured in Kentucky. Local legend says that the vast deposits of limestone in Kentucky’s tap water filters taste better than other tap water in the country. Thus, making it excellent for Whiskey distillation.

Another reason why Kentucky makes a fertile ground for Bourbon production is its fertile ground perfect for growing corn—Bourbon’s main ingredient. Thus, making Bluegrass State the landmark of Bourbon. But why is it called Bourbon, not Kentucky, then? There’s no clear record as to its origin; some say that it was named after the French Bourbon dynasty in recognition of France’s support in the American revolution.

During the 17th century, farmers from eastern Europe settled in Pennsylvania, bringing with them rye seeds. They planted these seeds in the rocky terrain of Pennsylvania and distilled the grains into Whiskey. Because of its corn and barley crops, Maryland, which are both ingredients of Rye, also became a rye producer. And the rest is history; both Pennsylvania and Maryland became the premiere producers of Rye Whiskey.

Different factors contribute to the flavor of Bourbon, but the three most basic recipe ingredients are 51% corn, barley, and the third grain varies from brand to brand. However, some Bourbon’s defected from the tradition making their own identity.

For Bourbon to be considered as Rye Whiskey, it must contain at least 51% rye grain. This is the common rule used to differentiate between Rye whiskey and Bourbon by laws in different countries. Thus, although they might have many similarities in terms of distillation and ingredients, you cannot consider Bourbon as Rye whisky unless it has 51% rye grain in it.

Can I Substitute Rye for Bourbon?

Rye can taste in many ways, but Rye’s most distinct flavor is its peppery tinge and its malt bill sting. Some rye can taste big and bold, leaving your throat with a fiery warmth. Some start harsher but become smooth and thin when you begin to swallow. Some start smooth, but the burn builds up gradually. But whichever appeals to your palate, it sure does makes you feel the rye difference.

Bourbon’s honeyed sweetness is its signature taste. Bourbon has four dominant flavor categories; grain, caramel, cinnamon, and nutmeg. That’s where Bourbons got its sweet taste. Bourbon is the superstar of cocktails because its versatility makes it the top choice of bartenders and drinkers. You can find Bourbon in many cocktail recipes.

Is Rye (Whiskey) Better than Bourbon?

It is a general truth that Whiskey contains an antioxidant element called ellagic acid that comes from grain. This acid prevents cancer-causing cells from getting in contact with DNA. Moreover, the good news is that there is continuing research that will prove rye grain to have a positive link to cancer prevention. This makes Rye a better option, health-wise, over Bourbon.

Rye and Bourbon have basically the same price range from its cheapest bottle to the most expensive ones. Their price ranges from $15-$800 depending on the proof, age, and flavors.

There you go, Whiskey enthusiasts! Choosing between Rye and Bourbon can be challenging. However, regardless of what your preference is, both spirits are excellent drinks in their own rights.

While Rye whiskey is known as America’s true native spirit, Bourbon claims the crown of being a distinctive product of the United States.

Go now to your nearest liquor store, grab that bottle, and see and taste the goodness inside each bottle. Nothing beats a good experience with good Whiskey.